[VIDEO] Kenya’s Most Explicit Music Video Yet :BLAQY SHOW ME

I’d never imagined I’d use a quote from the late Nelson Mandela on a review such as this, but shit happens sometimes. Anyway, the late statesman once said “No one truly knows a nation until one has been inside its jails.”  In the same way, the general state of music around here cannot really be understood if you do not strip it down to its core and see what it revolves around. We need to see it at its worst, or near-worst. Such moments of clarity are rare to find these days, now that musicians are backed up by massive PR and social media machines that employs all ways and means to keep up appearances. Such  moments require a “village madman” so to speak – an artiste only keen on churning out material as he or she wants without the extra frills and chills to make his/her material radio/TV friendly. The man of the moment in this case is Blaqy.

Blaqy is a new artiste under the Ghood Records label and he has dropped what I believe is his first single called Show Me (What Your Mama Gave You). The title gives the entire song away – 100% of this song is about a single part of the female body – the butt, the rump, the ass, the backside, the bum, the gluteus maximus, the rear, mawezere, diabs, mahaga – call it what you must. Blaqy has dedicated 3 minutes and 42 minutes to this subject alone. And he also decided not to waste time dropping verses to add some extra flesh to the song. Basically, the entire song is comprised of only a one-line hook and around three chants begging girls around the world to show us their tush, preferably shaken and stirred in rhythm with his beats. In as much as there is zero effort lyrically, the hook itself is catchy enough to have made for a good chorus, not a whole song!

The music video is just as simplistic and non-pretentious as the track. The very first shot was really stunning though and gave me the impression that maybe, just maybe, the video had something more to offer than what I already expected.

Check out a few pictures from the video shoot then watch the video below:

However, it turned out to be what it was supposed to be – a bunch of girls showing what their respective mamas gave them in typical Jamaican dancehall style by a swimming pool and a car junk yard – kinda like a video mash up between Summertime and Forward/Represent. When a song and video are strictly about butt-exposing, there’s nothing more to say really. 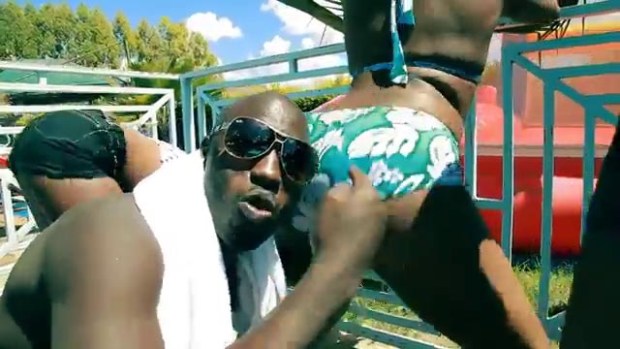 Blaqy did not produce this track from the goodness of his heart. No, he didn’t do it because a voice in his head is telling him that he has been appointed a goodwill ambassador for bums being shaken in dance floors all over the country. He did it because, right at the core of the urban music scene, that is how things are done around here. This song is a symbol of the creative process going on in most of our production houses. So long as all the fundamentals – a catchy beat and good looking visuals – are gotten right, even the most mediocre songs have a chance of success. Of course the culture is breeding some musicians who do not even put an ounce of effort into their lyrical content. Perhaps it is the product of an increasing global culture that puts visual stimulation first before anything else, where songs are watched instead of listened to. I don’t know.